Razer Phone 2 is launched in October in 2018 and became a strong competitor to ASUS ROG PHONE. It is a Gaming Smartphone for all users around the globe.

Razer and ASUS ROG are both known for their own gaming accessories for laptop products for many years. In 2017, Razer first introduced Razer Phone and ASUS ROG is also making the first ROG phone in 2018.

Xiaomi Black Shark is also the following competitor that launched Black Shark in 2018, and Xiaomi is trying to catch more attention on this product line.

(Razer’s famous logo on the back of Razer Phone 2, and you could change the colors.)

From the below photo, I listed out the Nextbit Phone, Razer Phone and Razer Phone 2 to see more clearly for the design.

They all get a thick bezel on top and the chin, it might not be trendy for the current smartphone concept. But, Razer did this on purpose! 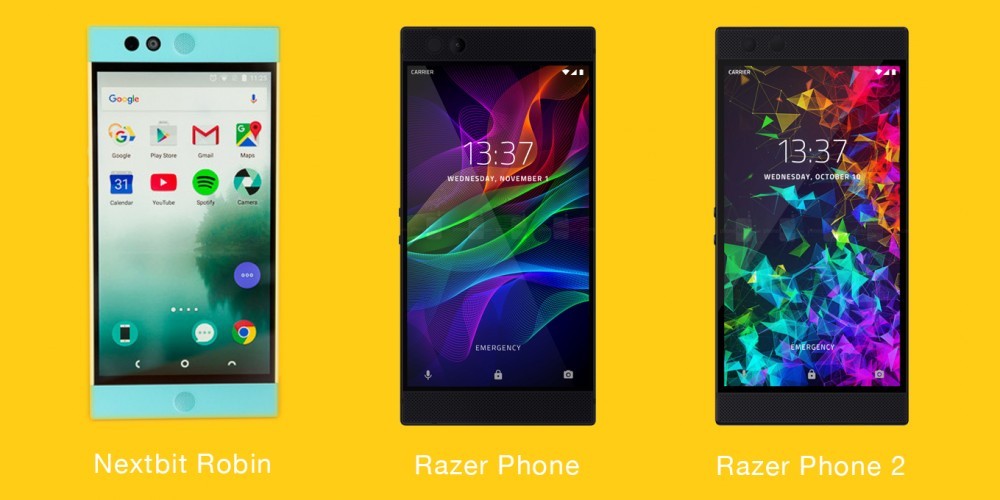 The overall mindset is GAMING! If Razer Phones are made like the current trend with full-screen experiences, it could not be very ideal for the gaming experience.

The reason why Razer Phone 2 designs with thick bezels on the top and chin are for all users to hold it when you are playing games. The bezels are actually two Dolby Atmos front-firing stereo speakers which sounds incredible and louder.

120 frame per second on an Android phone all the time is incredible!

The screen is 5.72″ 1440*2560 pixel IPS display, you might wonder why not comes with OLED screen? It’s because the technology so far couldn’t make this high framerate on an OLDE screen yet.

120 Hertz gives the screen color brighter and better accuracy, but it’s not set by default. You need to adjust it to 120hertz in the setting to see the amazing screen experience. (The default is 90 hertz.)

To optimize the battery life, the framerate will go down to 90herts or lower when you are just staying in the setting menu or looking at a photo. Once you start to click the screen again, it will go up to the max 120 hertz.

For the comparison of 60hz and 120hz, we could refer to the below youtube video. It’s mentioned that if you don’t have a monitor or phone with 60hertz to compare, it won’t make you feel “Awesome” instantly.

The feeling is like it’s okay to live without them, but once you make the leap, it’s really difficult to go back!

RGB Lighting for the logo

With RGB lighting of Razer Phone 2, you could choose the best color which stands for your personality or the character of your favorite games.

RGB is something built into Razer’s DNA and there are 16.8 million color options which you could find in the Chroma Configurator App.

Razer Phone 2 has two finishes to choose, one is classy mirror back and the other is rugged satin finish(matte black), for my personal opinion, I will definitely go for satin finish one because the mirror back might get all my fingerprints on.

(Razer Phone 2 comes in two finishes which include classy mirror back and rugged satin finish that truly suits you.)

Qualcomm Snapdragon 845 processor inside Razer Phone 2 is paired with 8GB RAM and vapor cooling system make it great for the performance.

Razer Phone 2 is equipped with all the advanced segments a gaming smartphone needs, and you cannot ask for more back to 2018.

The phone still gets warm sometimes but it won’t be as hot as the old phones when you were playing games. Don’t worry! 🙂 🙂 🙂 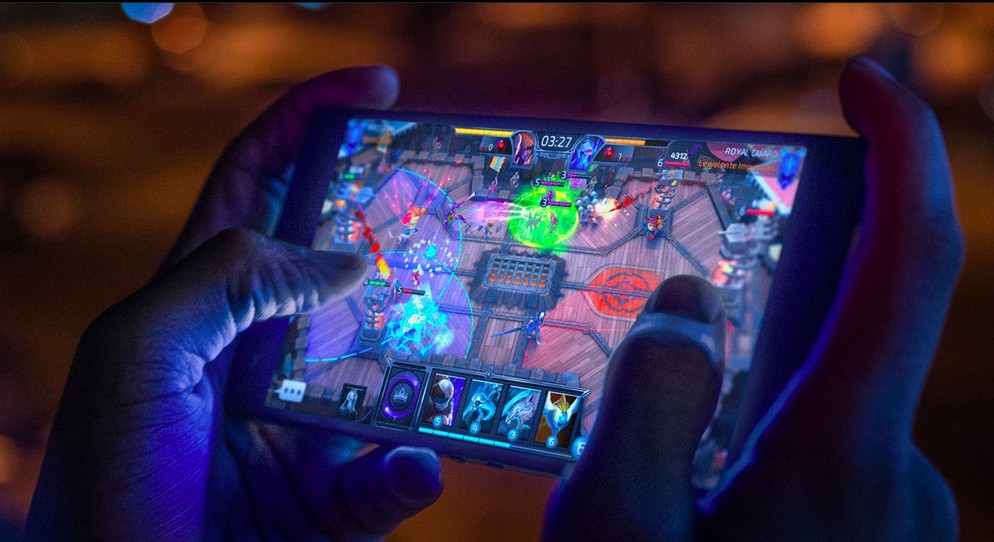 (Razer Phone is still the only smartphone with a true 120Hz screen.)

The battery is 4,000 mAh which is nice and decent for a gaming smartphone. If you are not a hardcore gamer, Razer Phone 2 allows you for a full-day battery life without charging.

When it comes to gaming, you should notice already how thermals play an important role in performance.

So, Razer customed a vapor chamber which could spread the heat to the surface of the phone and it does a lot of help to cool down CPU. This allows greater performance and stability compared to traditional cooling methods.

I remember Samsung Galaxy Note 9 has something similar to this cooling system, but the size seems a lot smaller than this one in Razer Phone 2.

(Razer Phone 2 has a vapor-chamber cooling system that allows heat to spread throughout the phone.)

The camera is not mainly focused on a gaming smartphone, but Razer is still doing excellently for its camera. I am surprised that the first 12.0 MP camera is with OIS(Optical Image Stabilization) since I cannot hold my phone still and always make the blurred results.

There are more modes out of the camera including an auto mode, portrait mode, beauty mode, and panorama.

As I tested the camera, I know it’s a gaming phone. There are still a few I would like to share.

Razer Phone 2 has a few accessories to choose, and it seems not fully developed for the accessories compared to ASUS ROG phones.

You could purchase the wireless charger, Hammerhead headphone, and Raiju Mobile to boost up your Razer gaming experience!

On the other hand, ROG phones get so many accessories to suit your taste including aerophone case, 4 kinds of docks, and game mobile controller. It’s a pity that Razer didn’t come up with other accessories for the gaming.

64 GB might be not enough for some gamers since we are in the era that every app gets so heavy, not to mention the gaming apps. For a better running performance, we all want larger internal storage.

Although Razer Phone 2 could support 1 TB microSD and has CORTEX MOBILE to boost the performance, I think the best way is to have larger storage by default.

The volume buttons on the left-hand side are really small that you could miss it easily and they also deliver a cheap plastic feeling since they are copying that from Nextbit design.

The power button on the right-hand side, it’s cool but you need to press it first then put your finger on the power button for one more second to unlock. It’s special that Razor Phone makes it this way.

Imagine this, you are in the important game with your team, but you are running out of the 4,000mAh battery. How are you gonna do for this situation?

You could only choose either charge your phone but play the game music with both speakers loud, or keep listening to the game music and give up your game with your team soon.

There is no perfect solution for charging your Razer Phone 2 and listening to the music simultaneously.

>>Check the Latest Price on Amazon<<<

Before I know a gaming phone, I thought it will be very mainly focusing on the performance without caring about other details. But, I changed my mind when the first Razer and ROG phone launched in the same year.

It is indeed a Gaming Smartphone for all users around the globe.

They showed the world that a gaming smartphone could do more than our expectation and there is only our stereotype which limits our imaginations.

I am happy and love to see more development from Razer in later years, and I am sure you won’t regret when you take a Razer Phone 2 home. It indeed has a lot to offer.

I hope you enjoyed this review and if you have any questions about Razer Phone 2or want to leave your own personal review, leave a comment below.