Huawei launches their flagships twice in a year, one is P series in the first half, and the other is Mate series in the second half. Especially, Mate 20 series has a 5G edition which is The First 5G Smartphone in China!

I love the idea that now USA, Korea, China now compete 5G in the same marathon, can’t wait to see the truth how 5G will change the way we live today justl ike the first generations of iPhones.

On 16-Aug, people in China could make a pre-order online for Mate 20 X(5G) , and it is mentioned that the total orders received is now over 1 million.(Amazing!)

Let’s follow Blablaphones for a better dive with 5G! 🙂 🙂 🙂 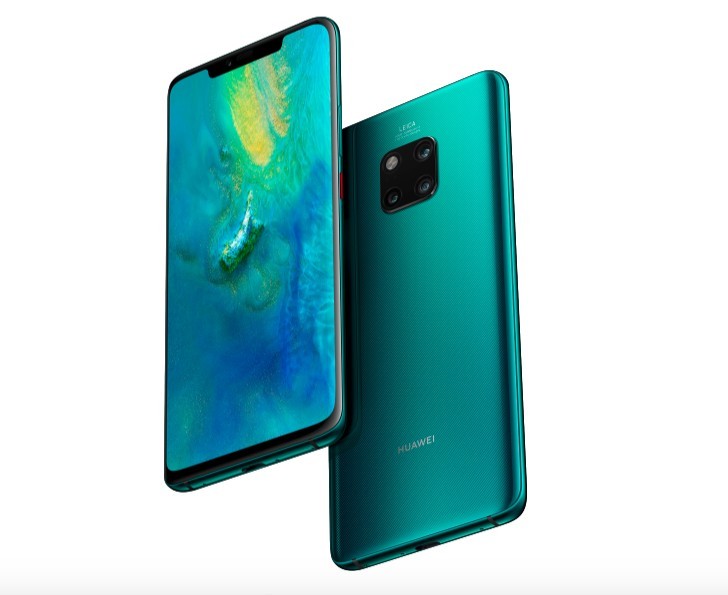 (Huawei Mate 20 Pro looks extremely symmetrical on the back.)

In the earlier this year, we see so many Samsung Galaxy A series phones with waterdrop design which houses a selfie camera and a better full-screen user experience.

Now, if we look at the design on Huawei Mate 20 family, you might feel a old and retro feeling for the notch since Apple iPhone X brought it to the world since 2017.

But, after a couple of days using the phone and holding it for any photos, I found myself not noticing the notch and the chin at all.

I fall in love with Huawei Mate 20 series is because of its design. The first time I saw it and touched it, I got a premium feeling for its 3D-glass-curved edges and they were TRULY hand-candy.

I also like the symmetrical layout on the back, and they give me a calm and peaceful feeling that could be timeless. The color on the back is very pretty.

Among all the different choices, I like the emerald green which reflects a special optical pattern glitters if you flip it in different angles.

If you look closely, you may notice that the rear camera set on the back of Huawei Mate 20 series look like the upcoming iPhone 11’s copycat camera square, right?

It looks like Apple is copying Huawei’s idea, a great artist steals?

(The camera set on Huawei Mate 20 series are just like the upcoming iPhone 11’s camera!)

Huawei starts working with Leica since 2014, and after the first phone with Leica lens in 2016, Huawei continued to launch many smartphones that carry Leica lens.

I have to admit that I used to be only aware of Apple & Samsung flagships in the past, but many Chinese smartphone manufacturers caught my eyes with the most creative innovations I never saw 2017 onward, especially in 2018.

Let’s see some of the best features on Huawei Mate 20 Pro that comes with Leica lens!

The camera set on Huawei Mate 20 Pro is 40.0 MP(wide) + 8.0 MP(telephoto, 3x optical zoom)+ 20.0 MP(ultrawide), and all the camera on the world-famous square are with autofocus and laser AF which make the autofocus quick and efficient.

In bright condition, it gives beautiful & vibrant colors. But in low-light condition, I could see some noise occurrence with a certain level of control, still fascinating!

I try to take photos in good condition, and I discovered some results are becoming too “Instagrammable”! I prefer some more natural photo that I could add filters by myself later on any social media.

But, the powerful AI inside Kirin 980 chipset sometimes run too much, I think.

I currently like Samsung’s wide-angle camera the most since it could let you adjust the corner or edges very naturally without losing too many fine details.

Huawei Mate 20 Pro also got an ultrawide-angle lens to mention, and it got the same problem – the loss of details on edges. But, you could crop it out as much as you want for the best result! Don’t worry. 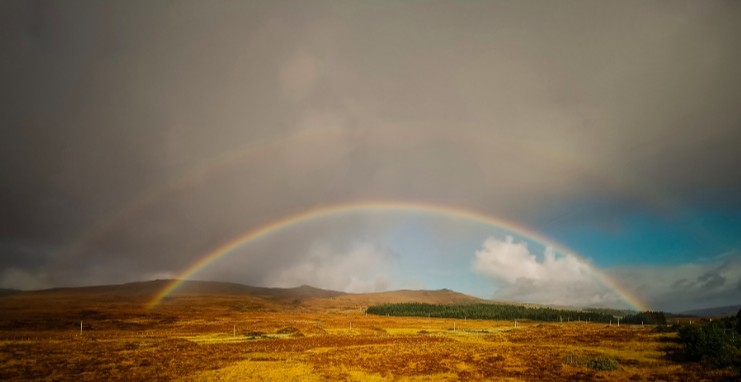 (You are able to take an ultrawide photo for a scenic view as above, isn’t it amazing?)

It’s still hard to compete with Google Pixel 3’s night sight since they have the best software enhancement so far in the world. Huawei, on this point, was doing a great job!

I found this macro shooting on Huawei Mate 20 Pro is surprisingly useful when you want to take some pretty photos for any creatures in the wild.

Imagine you travel in a forest or in a garden with so many insects, you could use Huawei Mate P20 series for the perfect shot just like what we saw often on Discovery channel.

If the object is less than 8cm, the smart camera will switch to the wide-angle mode and activate the super macro mode. I love to see something from my macro shots since human’s naked eyes sometimes don’t notice that much from our daily life.

If you try some macro shots with Huawei Mate 20 Pro, you would definitely be amazed again by the mother nature and glad you have a camera like Mate 20 Pro for so many details. 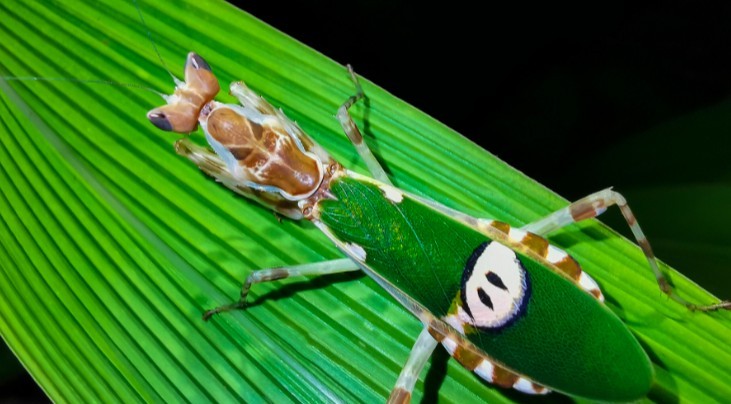 Using the front camera on Huawei Mate 20 Pro, you could either create a 3D live emoji based on your face(Apple called it Memoji.)

You could also scan any dolls to have an AR emoji and use them in any kind of photo and video, and I am sure it would be so much fun when you share with your friends.

(Huawei Mate 20 gets 109 scorings on Dxomark smartphone competition which ranks currently #6 on the list! Photo: Dxomark.)

It’s one the best chipsets in the smartphone industry compared to Qualcomm Snapdragon, Samsung’s Exynos, and Apple’s A-series Bionic. It’s another proof that Huawei is chasing so hard at a light-year speed.

It’s hard to understand that a 5,000mAh battery for a 5G phone is enough or not since what we know is so little so far for the 5G generation.

(Huawei Mate 20 Pro is equipped with a 4,200mAh battery which could last a whole day long.)

The ugly truth of 5G is China takes this as the top priority to develop each process for the whole world, and Huawei plays a very important role in 5G technology which is something that the USA is afraid of.

The first license approved for 5G in China is Huawei Mate 20 X(5G), the order received so far exceeds 1 million. Also, many Chinese smartphone manufacturers are going to launch 5G phones together by end of 2019.

So, it looks like in this 5G early stage, China would win due to the involvement of the world’s 5G progress and the 5G phones’ rapid universalization.

People tend to compare Huawei to iPhone, and wonder why are people still choose iPhone Xs MAX when the price is double? it’s mainly due to the user experience.

I heard a lot from my friends that A12 chipset from Apple is the best, and the whole experience is no other smartphone manufacturers could compete. My answer is almost the same.

With face ID, 3D touch/haptic touch, IP68 water & dust resistant and the OLED comes with super retina, all of this makes Apple the phone for the best user experience.

Top#02 Huawei Ban in the USA

Huawei ban was a giant issue in the first half of 2019, but it gets loose when both USA & China shake hands for the trade war. We are not sure the ban is officially off, and it might be turned on again once USA president tweets tomorrow.

Due to the ban, Huawei introduced their own operating system – HarmonyOS in Aug 2019. It’s the beginning of Huawei’s first try to connect all the smart devices they made 2019 onward.

Although I am still a fan of Android & iOS, I kinda expect something explicit Huawei’s HarmonyOS might bring to the whole world later on.

I know it’s a cliche that all Chinese smartphone companies will eventually work for its country, to expose all the users’ data to the government. But, there is no proof that could show any pieces of evidence on this concern so far.

Just keep this in mind, Huawei is the Top 2 smartphone manufacturer in the world. If you care about personal privacy so much, I suggest you go for iPhones or Google Pixels.

Huawei Mate 20 series is powerful that could easily fulfill our daily chores, so it’s hard to imagine the first 5G smartphone in China – Huawei Mate 20 X(5G).

I love the color, the build quality, the triple camera set, and the fast charging 40W on Huawei Mate 20 Pro. And, if the price ever bothered you in 2018, I suggest you check the price again today. It gets lower and lower when the new flagships are approaching later in 2019.

And, one more thing, at last, is to keep in mind that 5G will definitely bring a huge wave like Tsunami to our current world, now it’s just the beginning.

I hope you enjoyed this review and if you have any questions about Huawei Mate 20 family or want to leave your own personal opinions, you are welcome to leave a comment below.